Kirk Yetholm to Byrnes (and Bellingham).

Hello again on sunday, June 12th.
I see that I was pretty dis-orientated last time: I managed to write we had traveled from Glassgow, but the truth is we landed in Edinburg... 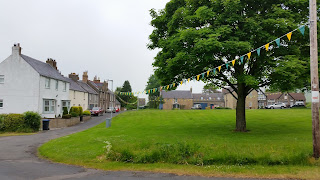 Kirk Yetholm, a Church and a Group of houses. Not much more, but friendly People and Nice weather.

The walk from Kirk Yetholm to Byrnes was 45 km. According to plan, this was split in two. The first night (Friday) we camped in the fog near Windy Gyle. Lack of drinkingwater made two of us klimb all the way down to to  the vally and filtered some water from a creek. Laboursome, but necessary. Quite nice temperature, but the fog was thick, and we coud never see more than 5 min. walk ahead. The only exception was 5 minutes while at the highest point near Mt. Cheviot. Then the beautifull green hills of Scotland was displayed like in a postcard!!
Saturday came with rain and more fog. 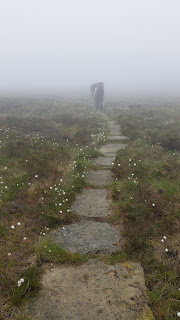 Path paved with stones across the wetest bog areas in Cheviot hills.

The day was a bit too much for one in the group, so we slowed down a bit, and came to Byrnes late in the evening. During the day we crossed the border from England to Scottland and back again all the time, walked up and down hillsides that I assume are strikingly beautiful and allmday hoped that the fog would lift. That did not happen.
No accomodations down in Byrnes, so we camped by the river. So did 10,000,000,000 moskitoes... 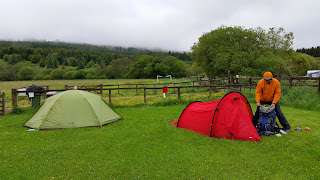 This day was not so good, and a lot different from what we had planned: One of us had some physical problems, and as we are a group traveling together, we phoned a taxi instead of walking. That taxi took us from Byrnes to Bellingham, where we checked in to Riverside Hall Hotel.
The rest of the day was spent shopping, eating and drinking to get fit for tomorrow (Monday). Spirits are higher now, in the evening, and we really believe we can continue over the hills and down to Twice brewed Inn at Hadrian's wall tomorrow. 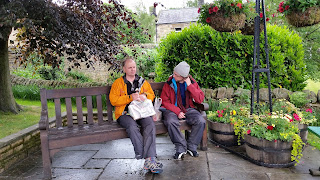